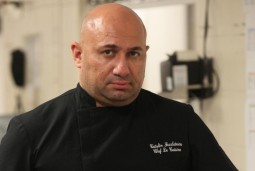 Said to be the biggest beerhouse in Southeastern Europe, Berăria H launched officially a new menu signed by Chef Cătălin Scărlătescu. Starting February, Scărlătescu is also responsible for the coordination of the team of chefs and the suppliers of Berăria H.

Once with the official launch on February 19, at 20:00, over 50 dishes carrying the signature of the host at Hell’s Kitchen (the Romanian version of the TV cooking show) are available at the beerhouse: from fish cream soup to Black Angus burger with onion jam and camembert in a roll made after one of Scărlătescu’s original recipe.

“The new menu is simply chemistry, physics and mathematics. The food is not sophisticated, but rather classic, specific to a beerhouse. There are no star dishes, all are worth tasting: sausages, the Viennese schnitzel, as well as the Mangalitsa meat dishes or the beef short ribs.” said Chef Scărlătescu.

Launched in September 2014 with an investment of EUR 3 million, Berăria H is located in Herăstrău Park in Bucharest and attracts up to 4,000 customers in peak days. Read more about the beerhouse here.