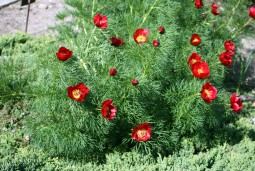 The month of May is the time of the year when peonies bloom, and one area of Romania has a unique place where this flower can be seen. It is the steppe peony reservation at Zau de Campie in Mures county. The reservation is 65 kilometers away from the city of Targu Mures and is the highest-altitude place in the world where steppe peonies grow, at 450 meters. Because of the warmer winter this year they started blooming earlier. They usually stay in-bloom for about seven days.
The peonies in the reservation, which covers 3.5 hectares, are between 10 and 30 centimeters tall. There are about 50,000 of them, 40,000 more than in 1950 but the flower can now be found only in the reservation, established in 1932 by Alexandru Borza. He is often regarded as one of the founders of Romanian School of Botanic.
During the Second World War, the steppe peony was saved from extinction and the surface of the reservation was expanded to 3.5 hectares by Marcu Sancraianu, who was the custodian of the reservation for 60 years, until 2005.
Other reservations in Romania where peonies can be seen are the one in the Macini mountains, in Dobrogea and the one at Comana, close to Bucharest. To get to the Macini reservation, one needs to follow the Cozluk route starting in Greci village. The route is accessible by car or by bicycle and is about 16 kilometers long. The reservation in Comana was built to specifically protect the peonies in the area, carrying the name of Scientific Reservation of Peonies. It was designed alongside the thorn plant reservation, on a 231 hectares area.