Other categories
City of Joy: In the Footsteps of George Enescu (½ day)

To many, George Enescu (1881-1955) is just a figure on a common banknote. To others, he was the teacher of Sir Yehudi Menuhin. For the music connoisseurs, Enescu is the author of Othello and the Romanian Rhapsody and definitely deserves to be praised by every major orchestra of the world in a special gathering held every two years in Bucharest. After all, as Enescu himself said, he never left his country: he took it with him.

Let us take you to a special tour of the City of Joy. Music is part of our life and this should be a discovery journey. As we walk, the troubled life of Enescu will unfold for you a setting once familiar to him.

Start on the sumptuous Calea Victoriei and discover the surroundings of the George Enescu Museum/ The Cantacuzino Palace. This belonged to his wife, a beautiful princess (no fairytale way of saying). Enescu came from a modest countryside family and rose only through his talent. Cross the street, a small plaque reminds of another music great figure that once played in Bucharest, Franz Liszt.

After seeing the Romanian Academy (Enescu was elected here in 1932), turn left on Dacia Boulevard to discover the new twists the city took in the much praised 1930s. As modern (for those times) popular music and jazz were taking Bucharest by storm, the old traditional sounds were still the major inspiration for Enescu.

You might want to bring a flower to lay at one of the George Enescu monuments in the city. It is strangely set on a sidewalk – but the adjoining street bears his name. Turn right to return to the Calea Victoriei and brace yourself for the spectacular Romanian Athenaeum. Once built to host popular lectures, it is today one of the most spectacular concert halls in Europe and, certainly, the pride of Bucharest.

The Athenaeum is located in cross the street from the former Royal Palace, where Enescu used to be a regular guest. From here let us take you to the heart of the city. At the National Military Circle, hear about Enescu’s involvement in the two world wars. Give yourself a treat – did you know that Enescu inspired a famous chocolate and orange sweet?

Continue to the building of the National University of Music. Located near the Cişmigiu Park, it was created for Romanians by expats who found out that the language of music is universal.

Tour Information: City of Joy: In the Footsteps of George Enescu

Starting point: Victoriei Square or any hotel in the city center

Price: Upon request (depending on the group size) 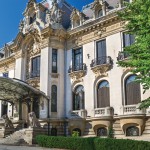 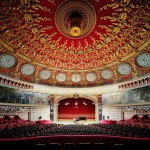 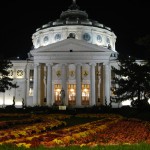