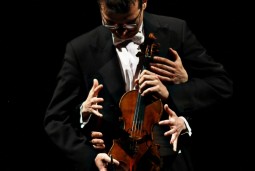 Romanian violinist Alexandru Tomescu along with Romanian actors Ana Pepine and Paul Cimpoieru. will hold a charity concert on Monday, January 14 at the National Opera in Bucharest.

The show, called Obsessions, will include a special scenography, centered around Alexandru Tomescu’s performance with a Stradivarius violin, on a background provided by the six sonatas for solo violin by Eugene Ysaye, with the helpf of the two Romanian actors.

Through this concert, Alexandru Tomescu supports the Special Olympics Foundation in Romania and the athletes with intellectual disabilities who will participate at the Special Olympics Winter World Games 2013 which will take place in PyeongChang, South Korea. Ten Romanians will represent our country taking part in sporting events such as cross country skiing and alpine skiing.

The Special Olympics Romania Foundation is a part of an international sport movement established in 2003 that contributes to social integration of people with intellectual disabilities, giving them a chance to discover and develop their skills through training special programs.

The concert will start at 19:00 and the tickets for the event are available on eventim.ro network at prices from RON 40 to RON 80 depending on the category.