An upside down world, as seen by Philippe Ramette 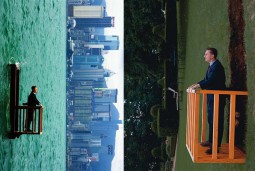 French artist Philippe Ramette will be in Bucharest on March 18, at the opening of his exhibition in Romania’s capital. Organized by the French Institute, the Sens dessus-dessous/ Upside down exhibition showcases a series of photos that made Ramette known as the poet of absurd in a demoralized world.

Since the early 1990s, Ramette has been creating objects that are designed for a specific use that is spelled out in their title, for example, object for isolating yourself, for moving mountains, for levitating, for seeing yourself looking, for traveling in time, for getting yourself struck by lightning or for handling the void. Be it armchairs, artificial limbs or gallows, these instruments attract more than simple contemplation. “Generally,” says Ramette, “it’s not the object that’s important, it’s the idea of a possible future use and especially what that use is going to entail in terms of transformations.” Whether it’s his Boîte à isolement (Isolation Box), a wooden case for enclosing your head, or his Objet à voir le chemin parcouru (Object for Seeing the Distance You’ve Come), a wooden base to be attached to the skull and sporting side mirrors enabling the wearer to see where he or she is coming from, it is indeed the uses these objects lead us to imagine, the scenarios they turn out, that interest the artist most. Along with his “mentally activated” sculpture-objects, Ramette produces images in which he poses himself in situations for which his objects were originally created.

The opening of the Sens dessus-dessous exhibition will take place on Wednesday, March 18 at 19:00 at the Centrul Artelor Vizuale-Multimedia/ Centre for Visual Arts – Multimedia at 16 Biserica Enei Street in Bucharest. The exhibition will be open from March 18 to April 11. Entrance is free.

Watch below an interview with the artist (in French, Italian subtitles):