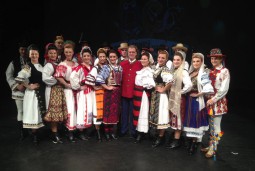 André Rieu announced his seventh concert in Romania which will take place on Friday, June 5, in Constituţiei Square in Bucharest. Tickets for the concert are already available online on www.eventim.ro and in the Eventim network at prices ranging from RON 172,8 to RON 864 (VIP).

The famous violinist ended a brief visit to Bucharest this Thursday. André Rieu announced his fans that Romanian pan flute musician Gheorghe Zamfir will be the special guest of his seven concerts in Bucharest.

“I feel so good that I could revisit Bucharest and meet again its wonderful people! I am pleased to prepare the details of the program of the concerts in Bucharest and I am very glad that Gheorghe Zamfir will join me!” said André Rieu.