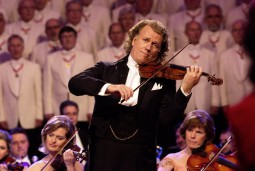 Dutch violinist and conductor Andre Rieu will begin the series of his first Bucharest representations on June 5th, at 20.30 in Piata Constitutiei, the location of all the concerts he is scheduled to deliver in the capital. Other representations are set for June 6th, 7th, 11th, 12th, 13th and 14th.

Known for creating and leading the waltz orchestra Johann Strauss, Rieu is one of the most awaited acts of the year in Bucharest. Tickets to his first concert sold out shortly after release, prompting a series of unexpected additional events.