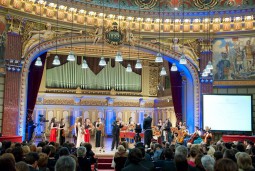 The eight edition of the royal charity concert is taking place on October 25th at the Bucharest Athenaeum. The concert is organized by the Princess Margareta of Romania Foundation and aims to raise funds for the Young Talents program, which supports young Romanian artists in the field of classical music and fine arts who are at the beginning of their career and need financial support to further develop. At the same time, the concert marks the anniversary of King Michael I of Romania.

The royal family of Romania will be attending the event, where the Princess Margareta of Romania Orchestra, conducted by Tiberiu Soare will perform, alongside tenor Teodor Ilincăi.

The concert will be recorded and broadcast by TVR1 and Radio Romania Muzical.