Bucharest exhibition looks at Romania during the Great War, from daily life to military history 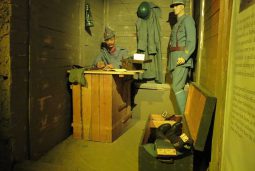 An exhibition opened at the National History Museum of Romania in Bucharest looks at “Romania during the Great War” and documents the country’s history and life in the period between 1914 and 1918.

The exhibition marks the centennial of Romania’s entering the war. It also looks at the situation of Transylvania, Bucovina and Bessarabia, which were impacted by the political and military developments taking place in Romania between 1916 – 1918/1919.

Unlike other exhibitions dedicated to Romania’s participation in the World War I, which centered on the events in the former territories and on the military victories in the first part of the campaign in Transylvania, especially those in Oituz, Mărăşti and Mărăşeşti in the summer of 1917, the recently opened exhibition takes a more inclusive view of the Romanian realities of the time, and of the provinces that were under Austro-Hungarian and Russian administration, the organisers say.

The exhibition presents topics that were less approached until know, such as the military defeats of the fall-winter of 1916 or the pain of the civil population that was either taking refuge or stayed under foreign military administration. At the same time, it looks at what happened to Romanians who fell prisoners to the Central Powers, the epidemics, the daily life or at samples of war art.

Those visiting the exhibition can encounter official and private documents of the time, newspapers, photography, military uniforms and many items displayed for the first time. Visitors can also see reconstructed scenes from the war tranches, hospitals, communication of the time, or Bucharest under German occupation.

An entrance ticket costs RON 7. Tickets can be purchased at the museum. The exhibition stays open until March 15th 2017.

The exhibition is the result of a collaboration of the National History Museum of Romania and twenty other institutions in the country and the Republic of Moldova. It also includes items from the private collections of Cristian Scăiceanu, Dan Dimăncescu (Boston, US), Adrian Săvoiu, Dumitru Cătălin Drăghici, and photos from the archive of Humanitas Publishing House.