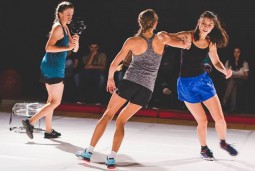 The Bucharest International Dance Film Festival will take place November 6th to November 8th at Cinemateca Union. The event showcases films that have as a theme dance and generally choreographic art and aims to make audiences more familiar with the diversity of dance forms and contemporary cinematic approaches.

The program of the festival includes an International Competition, short and long-form documentaries and a selection of the most popular dance films presented at Berlin’s Pool International Dance Film Festival.

The 54 productions included in the official competition will be judged by a jury made up of Sarah Moller, artistic director of Pool International Dance Film Festival; Andreea Capitanescu, artistic director of 4Culture, WASP-Working Art Space and Production and eXplore festival; and Jevan Chowdhury, director of dance films and founder of the Moving Cities project.