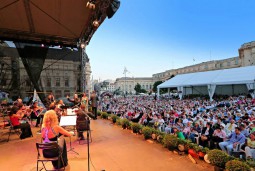 The tenth edition of the Bucharest Music Film Festival will take place between June 19th and June 28th in the George Enescu square, in front of the Romanian Athenaeum. The festival will host classical music concerts but also performance of R&B, pop and swing artists.

The program includes concerts by the National Radio Orchestra, the Bucharest Symphonic Orchestra, the Romanian Youth Orchestra, the Symphony Strings Quartet but also the Bucharest Jazz Orchestra and local pop artists. On June 22nd and June 23rd several films will be screened, featuring concerts with Martha Argerich and a performance of the Lucia di Lammermoor by the Metropolitan Opera.

Access to all events in the festival is free. The full program is available here.