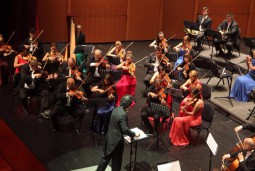 The Bucharest Symphony Orchestra will deliver the fourth run of its traditional New Year’s concert on December 30th at Sala Palatului, starting 19:00.

Conductor Jin Wang is a special guest at the event.

The Bucharest Symphony Orchestra is an orchestra based in Bucharest, founded in 2006 by the Philson Young Association. Starting in 2011, Benoît Fromanger was appointed its Music Director and Principal Conductor. The orchestra developed a social educational project named Salut Cultura! to encourage the art of sound and interpretation. Its purpose is to present cultural events that facilitate the understanding of music through open communication between audience and artists. It focuses on educating and training children in the fascinating spirit of classical music, as well as on encouraging music fans to enjoy live symphony concerts. Concept concert programs from the project include: Greatest Hits, Sympho Solo, Sympho Kids, Sympho Pops, Symph’ Opera, Sympho Modern and Traditional.