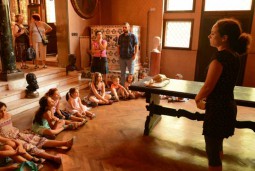 The Museums Caravan, a series of workshops for children hosted in several Bucharest museums, is taking place until September 11th. At its fourth run this year, the event takes children through various workshops aimed at explaining artistic techniques inspired by the items held by the host museums.

The participating museums are: the Museum of the City of Bucharest, with six of its locations – the Theodor Aman Museum, the Ligia and Pompiliu Macovei Art Collection, the Frederic Storck and Cecilia Cuţescu Storck Museum, the CC Nottara Museum and the Sutu Palace; the Vasile Grigore Art Museum, the National Museum of the Firemen and the Technical Museum.

The scheduling of workshops is available here.