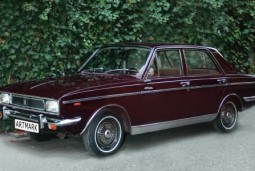 The Paykan Hillman-Hunter (Chrysler) limousine, which was a gift from Mohammad Reza Pahlavi, Shah of Iran, to Romania’s late communist dictator Nicolae Ceausescu, will be put up for sale during Artmark’s Christmas Auction scheduled for December 9. The starting price is EUR 4,000, according to Artmark’s auction catalog.

The limousine had a 1,496 cc motor which can generate 54 hp and can take it to a maximum speed of 145 km/hour. The car is in excellent shape and can be driven on public roads, accordin to Artmark.

Hillman is one of the oldest car manufacturers in Great Britain. Hillman Motor Company was founded in 1907. It was taken over by American group Chrysler in 1967. The Paykan Hillman-Hunter was produced by the Iranian national auto company, in Tehran. This particular one, which was a gift to Ceausescu, was produced in 1974.