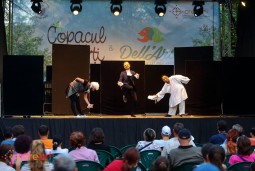 The summer edition of the Dell’Arte theater festival will be on in the capital until September 6th. The festival present productions of graduates of the theater and film school in Bucharest in open-air locations in Bucharest, such as the Cismigiu Park or the Lahovari Films Garden.

The audience will be able to enjoy both classical and contemporary plays, as well as choreography or puppets shows for children. Playwrights whose works are featured in the program include Lope de Vega, Georges Feydeau, William Shakespeare, Adolphe Phillipe D’Ennery, Alan Ayckbourn or A. R. Gurney.

The full program of the event, which is a free-access one, can be checked here.