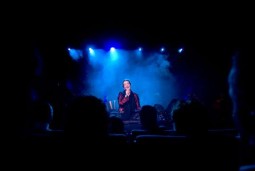 Portuguese singer Dulce Pontes, who is considered a worthy descendant of Amalia Rodrigues, will perform at Sala Palatului in Bucharest, on February 9, 20:00.

Dulce Pontes was born in 1969 in Montijo, Portugal, and during her career she has dabbled in many musical styles, including pop, folk, and classical music. In 1991, she won the Portugal music festival with her song Lusitana Paixão. In the same year, she represented Portugal at the Eurovision Song Contest.

Pontes has collaborated with important artists such as Cesaria Evora, Caetano Veloso, Marisa Monte, Carlos Nunez, or Andrea Bocelli. More about the Portuguese artist on her official website.

Tickets for the concert in Bucharest cost between RON 50 and RON 150 and can be purchased from the Biletoo store in Unirea Shopping Center, Flanco, Germanos and Diverta stores, Adevarul and Eminescu bookshops, or online from myticket.ro.