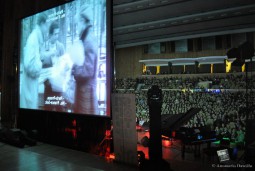 ShortsUP Musicology, the first edition of the year of the ShortsUP film festival, is dedicated to highlighting the connections between music and film and takes place on February 27th and February 28th at Sala Radio.

As part of the program, the Symphactory Orchestra, led by conductor Daniel Jinga, will recreate the soundtracks of a collection of early Romanian shorts. These include the 1927 Haplea, directed by Marin Iordan, and the oldest Romanian animation film in the National Film Archive or the 1936 Bucuresti, orasul constrastelor (Bucharest, a city of contrasts), directed by Kurt Wesse and Paul Călinescu, a documentary about the social life of the capital in between the two world wars.

A second part of the event is dedicated to contemporary musicals and to a series of shorts where rhythm and movement play an important part.

Tickets and passes, priced RON 30 to RON 55, can be purchased at eventbook.ro and the Anthony Frost, Kyralina and Hecate bookstores. Passes are also available at the box-office the night of the events, at a slightly higher price.