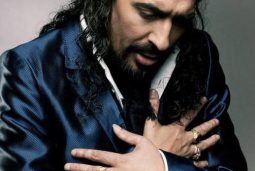 Spanish born flamenco singer Diego el Cigala will perform in Bucharest next year, on May 9th, at Sala Palatului. El Cigala is regarded as one of the top flamenco singers in the world. His concert is expected to take audiences into a foray of Cuban, jazz, Latin-American folk and tango music.

Labeled ‘the Sinatra of flamenco music,’ El Cigala won two Grammy awards, and was nominated five times for the Latin Grammy awards. Spanish flameno vitruoso Paco de Lucia described El Cigala’s voice as “one of the most beautiful flamenco voices of our time, a sweet voice floating above tthe world.”

He started his solo career in 1997 and four years later he was being nominated for the Best Flamenco Album prize for Corren Tiempos de Alegría. His collaboration with Cuban pianist Bebo Valdés resulted in the 2003 album Lágrimas Negras, which marked a revolution in the flamenco genre and brought him a Latin Grammy. It also turned the musician into an international star and launched some of the best-known hits in the Hispanic-American world.