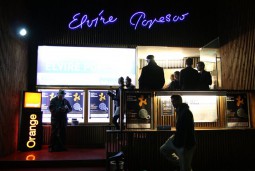 On November 1st, the festival is organizing in partnership with Les Films de Cannes à Bucarest, the Golden Day, an event dedicated to the best international cinema productions of 2015.

All films in the festival are screened in their original version and with English subtitles. The full program of the event is available here. In Bucharest, the screenings take place at Cinema Elvire Popescu. The other Romanian cities where the festival is presented are: Brasov, Buzau, Cluj, Sibiu, Iasi, Timisoara and Constanta.