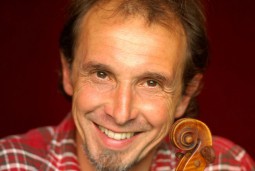 Gilles Apap (pictured) performed as a soloist with orchestras around the world, among which the Leipzig Gewandhaus Orchestra, the Israel Philharmonic, the Boston Philharmonic, the Berliner Symphoniker, the Bern Symphony Orchestra, the Israel Philharmonic and the San Francisco Symphony. He approaches a variety of musical genres, as diverse as American Old-time, Irish and Gypsy fiddling, with the standards of the classical repertoire.

Born in a family of musicians, Diana Ketler made her debut at the age of 11 under the baton of Vassily Sinaisky. She appeared as soloist and chamber musician in almost every European country, Japan, Canada, USA and Russia with the Salzburger Kammerphilharmonie, the Münchener Bachorchester, the Kobe, Munich and Riga Chamber Orchestras and the Latvian National Symphony Orchestra. She held recitals at the Glenn Gould Studios in Toronto, at the South Bank in London, at the Bridgewater Hall in Manchester, the Tokyo Opera City Hall, the Suntory Hall and the Osaka Symphony Hall. She performs regularly at renowned festivals such as Lucerne Festival, Wiener Festwochen and Gstaad Musikfestival, Oxford Chamber Music Festival and Elverum Festspiele. Since 2004 she is the artistic director of the Chiemgauer Musikfrühling Festival in Germany and artistic director of the SoNoRo Festival. Since 2001 she teaches piano at Royal Academy of Music in London.

Tickets, priced RON 27 and RON 48, are available at eventim.ro.