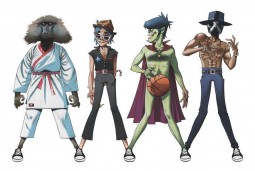 A new Gorillaz Sound System will be hosted by Atelierul de Productie in Bucharest on December 6, and will bring its founder, Remi Kabak, the man behind the character of Russel Hobbs AKA “That overweight drummer from the band called Gorillaz”.

This time he will share the stage with a live act called Onra, a French producer that has roots in ancient Vietnamese cultural music, and Phaeleh, a multi-instrumentalist artist, producer and DJ whose last album was named by the Guardian as “Bursting quality”.