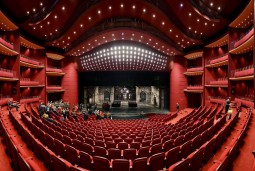 Bucharest will be the host this fall of the NETA 2015 International Theatre Festival, from August 28th to September 4th.  As such, the National Theatre in Bucharest, the initiator, organizer and host of the event, will accommodate representations of 13 productions from ten countries members of the New European Theatre Action NETA network.

Comedy, tragedy and dance-theatre, classical and contemporary plays, collective works and plays directed by their authors, in the light of the most modern directorial visions, are all part of the program. Some of the productions to be shown in Bucharest include Long Day’s Journey Into Night by Eugene O’Neill; Confusions, a Robert Musil adaptation; A Midsummer Night’s Dream by William Shakespeare; and Electra, a Sofocle adaptation.

You can check the full program of the event here. Tickets will go on sale starting August 3rd at the National Theater box office.