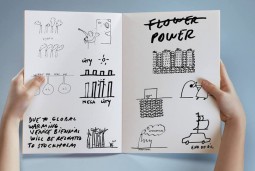 On January 15, probably Romania’s best-known contemporary artist, Dan Perjovschi, opens a talk on the artists’ responsibility towards ecology, pollution and consumerism. All these issues are included constantly in Perjovschi’s 20 art projects he carries out every year. Having been involved in several social and local environmental campaigns such as Iașiul iubește teii (Iași loves linden trees) or Uniți Salvăm Roșia Montană (United, we save Roșia Montană), he raises questions on the artist’s responsibility and power to act upon them.

Over the past decade, Dan Perjovschi has created drawings in museum spaces, most recently in the Museum of Modern Art in New York City in which he created drawings during business hours for patrons to see. The drawings are a political commentary in response to current events. Another exhibition of Perjovschi’s within a Portuguese bank consists of several comic strip style drawings which address several European issues such as Romania’s acceptance to the EU and the legalization of abortion in Portugal.

His first retrospective was held at the Nasher Museum of Duke University in 2007 and the second at CCC in Tours in 2012. He received the Gheorghe Ursu Award in 1999, Henkel Award 2001, George Maciunas 2004 and Princess Margriet Award ECF-2012 (with Lia Perjovschi).