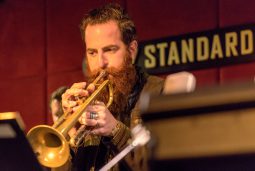 The concert is part of the musician’s tour promoting his ECM album Into the Silence, produced by Manfred Eicher. With a collection of expansive and impressionistic jazz quartet compositions, the album is a reflection on the final moments of the life of the musician’s father, David.

Voted for three years in a row as a Rising Star by prestigious DownBeat Jazz magazine, Cohen become known at an international level as a musician with an individual sound and an inquiring spirit. The New York Times described him as “an trumpeter extravagantly gifted, relaxed and sentimental…combining with dexterity sensibility and flair,” while Chicago Reader labeled him as “probably the most interesting Israeli jazz musician in the world”.

Besides his musical activity with the Triveni trio, the musician records and tours worldwide with the Mark Turner Quartet or the 3 Cohens Sextet, the family brand built alongside his sister, clarinet and saxophone player Anat and the frazzle saxophone player Yuval. Cohen was also a member of the San Francisco Jazz Collective. Starting with 2015 he is the artistic director of the Jerusalem International Jazz Festival.