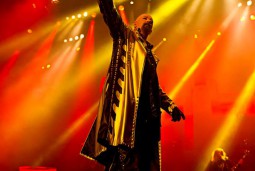 British band Judas Priests is back in Bucharest for a concert on July 1st to promote their Redeemer of Souls album. The concert will take place in the Romexpo parking lot.

The English heavy metal band was formed in Birmingham, England in 1970. The band has sold over 45 million albums to date and were ranked by MTV as the second Greatest Metal Band of all time. The band received their first public validation with their 1974 debut album Rocka Rolla. The group authored pieces such as British Steel (1980), Screaming for Vengeance (1982), Painkiller (10980), Breaking the Law, Living After Midnight or You’ve Got Another Thing Coming.

Tickets to the concert, priced RON 130 to RON 270, are available on eventim.ro.