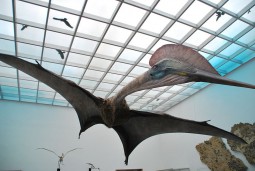 A full-scale replica of Hatzegopteryx, one of the largest flying dinosaurs to have roamed the world and discovered on Romania’s territory, will be unveiled for the first time at the Natural History Museum Grigore Antipa in Bucharest.

The dinosaur, which belongs to Dino Parc Rasnov, will be presented as part of the exhibition Wings over Time, and was reproduced according to the discoveries made by Dan Grigorescu, the professor who found the bone fragments belonging to the giant animal.

The exhibition is open July 28th to August 14th and includes replicas of the Pteranodon animatronic and three more exhibits placed inside the Geology museum in Bucharest.

Hatzegopteryx (Hateg basin wing) is a type of azhdarchid pterosaur, known from incomplete remains found in Hunedoara county in Transylvania, Romania. The large-size dinosaur lived approximately 71 to 65 million years ago. The one to be displayed at the Antipa museum has a wings opening of 12 meters and an approximately three-meter skull.

The dinosaur replicas will return to Dino Parc Râşnov after the Bucharest exhibition.