Legendary band Toto will hold their first concert in Romania 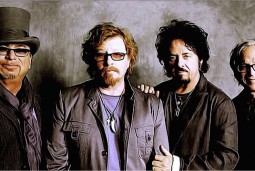 Toto will hold their first concert in Romania on June 27 at Sala Palatului in Bucharest. The band will be performing legendary hits like Hold the Line, Africa, Rosanna, I Will not Hold You Back or Georgy Porgy. The concert is part of a tour promoting the latest album after a break of 9 years. XIV will be officially launched in March 2015 and will be available in Europe as of March 20.

Known as one of the most popular bands in the ’70s and ’80s, Toto marked the pop music culture with hits acclaimed by several generations. Their performances were acknowledged by the NARAS (National Academy of Recording Arts and Sciences), receiving no less than 225 Grammy nominations. As a band, Toto sold 35 million albums and their fans fill up stadiums and concert halls worldwide. In 36 years of career, the band members were involved in an impressive number of albums, bringing them an overall of half a million records sold worldwide.

They are a symbol of pop culture and are one of the few bands who kept their original style despite all changes in music trends.

Tickets for the concert in Bucharest range between RON 121,5 and RON 450 and are available online on www.eventim.ro and in the Eventim network (Germanos, Orange, Vodafone and Domo shops, Humanitas and Cărturești book shops).