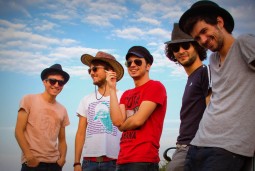 Before the release of their new album, Romanian band Les Elephants Bizarres decided to join forces with younger Romanian band Changing Skins and offer the audience a live concert in Why? Not Club (formerly Jukebox) in Bucharest on February 1, 2013.

Changing Skins is a Bucharest fresh band formed in 2009 at the initiative of Horatiu Ghibu (voice) and Stefan Mustata (guitar), who approaches a healthy and honest hard-rock without ceremony. Their success began with their first released songs “Ain’t Worth It” and “Perfect Foes”, the first one being intensely broadcast on radio and the second won the public admiration at the “Tuborg Sound” final.

The concert will start at 21:00 , and the entry costs RON 20 can be purchased on the door.