Listen to 2Cellos redefining the rules of classical music 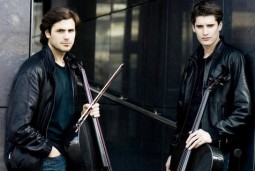 2Cellos, famous cello virtuosos, will hold a concert in Bucharest on December 8, at 20:30. Accompanied by drummer Dušan Kranjc, the duo will perform classical rock hits, redefining the concept of a cello concert.

The two young men who brought down the rules of classical music, Stjepan Hause from Slovenia and Luka Šulić from Croatia toured the world, after their cover of Michael Jackson’s Smooth Criminal became a hit on YouTube, having over 3 millions views in less than two weeks and over 10 millions afterwards. This success later brought them a contract with the Sony Masterworks records label and a tour with Elton John.

Their first album won the title of best international album and ranked (number one in Billboard US classical music top and the second featured artists like Elton John, Steve Vai, Lang Lang and many others. The two orchestra-men combine with artistry the classical with the contemporary one and always insert surprise elements like: Thunderstruck (ACDC), VooDoo People (The Prodigy) or Welcome to the Jungle (Guns’n Roses).

For more details on the concert in Bucharest, check out the event page.