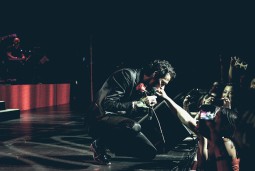 Marc Anthony will be performing in Bucharest’s Sala Palatului on March 31. His Europe tour, including Moscow, Kiev, Istanbul and Bucharest, was initially scheduled for 2014, but was postponed due to the conflicting situation in Ukraine at that time. In 2014, the violent incidents in Europe also affected the tours of other international artists like Depeche Mode.

Marc Anthony is the best-selling tropical salsa artist of all times, winning two Grammy awards and three Latin Grammy prizes and selling millions of albums worldwide. Anthony released his first album, When The Night Is Over, in 1991, while his 1995 album was nominated for a Grammy, with songs like Te Conozco Bien, Hasta Ayer, and Nadie Como Ella. The artist married pop star Jennifer Lopez in June 2004, but the couple announced their separation in July 2011.

Tickets range from RON 220 to RON 850 (VIP category) and are available online on www.bilete.ro. Tickets already sold for the show initially scheduled for May 19, 2014 remain valid for the event to take place this March. Also, those who chose to keep their tickets will get the chance to meet the artist at the ”Marc Anthony After-Party” event to take place in a club in Bucharest. The location will be later announced.