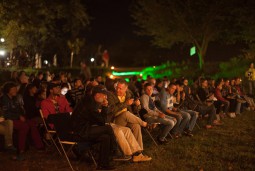 Three feature films and five Romanian shorts are part of the selection of this year’s Divan Film Festival, set to take place August 21st to 30th in Craiova.

Some of the films to be shown at the festival are Andrei Blaier’s 1975 Ilustrate cu flori de camp (Postcards with wild flowers), which tackles the topic of abortion in communist Romania; Oana Giurgiu’s 2015 film Aliyah Dada, a history of Jews in Romania; and Alexander Nanau’s awarded documentary Toto and his Sisters. The entire program of the festival can be checked here.

Screenings will take place the first two evenings of the event in the newly renovated historical center of Craiova and will continue, starting August 23rd, in Portul Cultural Cetate (Dolj County) with more films and culinary demonstrations.

Camping is free during the festival, within available places. Registrations can be made on the event’s Facebook page.