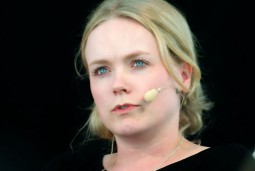 Norwegian singer Ane Brun announced her first concert in Romania, scheduled for May 10, at 20:00, at Bucharest’s Sala Radio.

In the past ten years, her name has been constantly present in the charts in Scandinavia, winning three prestigious Spellemannprisen awards – the Norwegian equivalent of the Grammys. She performs on famous stages, was invited to tour with Peter Gabriel and, last year, her song “Don’t leave” was heard in the commercial break during the famous Super Bowl, on the soundtrack of a spot for the American Cancer Society. Ane Brun composes for guitar and piano and, when not on tour, she works on her own record label, Baloon Ranger.

Ane Brun will perform for the first time in Romania in a solo concert accompanied by visuals. According to organizers, the playlist may include covers of Bjork, Alphaville, Cindy Lauper and PJ Harvey.

Tickets at the concert on May 10 are available online on www.eventim.ro and in the Eventim network (Germanos, Orange, Vodafone and Domo shops, Cărtureşti and Humanitas bookstores) at prices of RON 95, 135 and 175.

Watch below her latest video published on YouTube on March 10, for her first single from her new album: