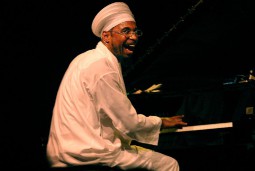 Omar Sosa Quarteto Afro Cubano will perform in Bucharest on June 30th in a concert set to take place at Sala Radio, starting 20:00.

Nominated seven times for the Grammies, Omar Sosa is an eclectic artist, exploring the African roots of Cuban culture and revealing them through his own authentic and varied filter.

Sosa left Cuba in the 90s, lived in Ecuador and the US, before moving to Barcelona. After completing his academic studies as drummer he became increasingly attracted to piano. He later became famous as a pianist and repeatedly declared that he would rather ‘hit the piano’, which he viewed as a conga with keys or a row of 88 drums.

This is the first time he is in Bucharest, where he will be presenting his 24th album, defined by the title it carries: Ilé. This can be roughly translated as ‘homeland’, and the term comes from West African culture. Sosa will be performing alongside Leandro Saint-Hill (saxophone and flute), Childo Tomas (Voice and bass) and Ernesto Simson (drums).

Tickets, priced RON 115 to RON 175, are available in the Eventim network and at eventim.ro.