Over 200 artists expected at Classics for Pleasure festival in Sibiu 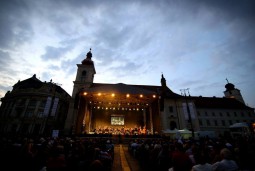 Over 200 artists, ten international guests, three orchestras and one ensemble will perform at the Classics for Pleasure festival, set to take place in Sibiu from August 14th  to August 16th. The fifth edition of the festival will bring to the public classical music concerts in the Piata Mare of Sibiu and a medieval and Elizabethan music concert at the Ursulinelor Church.

The Operetta Gala is scheduled for the night of August 14th, when well-known pieces will be performed by artists such as Tina Munteanu, Irina Baiant, Amelia Antoniu, Alfredo Pascu, Cătălin Petrescu, Ernest Fazekas, Florin Budnaru and the Ion Dacian theater orchestra, conducted by Constantin Grigore. The afternoon of August 15th is dedicated to a Divine Old Music concert, delivered by the Ancient Music Studio. Mozart Spectacular is the title of the concert on August 15th, when the Royal Chamber Orchestra, conducted by South Korean Hyun-Jin Yun and having pianist Andrei Licareț as soloist, will perform. Proms of Delight is the concert scheduled for the event of August 16th. It will feature the Sibiu Philharmonic, conducted by Mark Stringer. Soloists will be soprano Kataryzna Dondalska, tenor Stefan Pop and mezzo-soprano Ema Pascu.

Access to the events in the festival is free. You can check some Sibiu accommodation options here.