Revamped National Opera in Bucharest to open a new season 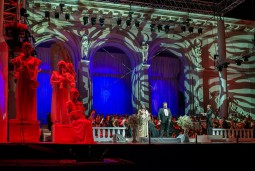 The National Opera in Bucharest opens the new season on October 30 with a premiere of La Traviata by Giuseppe Verdi, under an initial direction of the well-known British opera director Paul Curran. The 2014-2015 season brings six premieres, the New Year’s Eve Concert, The International Ballet Gala, the International Canto Competition Le Grand Prix de l’Opéra at its third edition and the Promenada Operei at its ninth edition.

The opening of the new season marks an important moment in the history of the institution: rendering the architectural and chromatic beauty of the National Opera building. The revamp is a comeback to the architectural style and aesthetics of the initial project, bringing to light the artistic elements that make the building. Moreover, the acoustic research ordered by the institution brought solutions and the correction of deficiencies for both the concert hall and the orchestra pit.

Throughout the 2014-2015 season, the National Opera in Bucharest will provide the public with a series of spaces and facilities that make the Opera a complete experience. The Opera Museum, the book shop which are now in a modernization process, the cafés and the Studio for children where workshops for the little ones are organized during shows, to name a few.

Tickets for the entire season are already available online at tickets.operanb.ro and bilet.ro, as well as at the ticket office of the National Opera in Bucharest, from Monday to Sunday, during 09:00 – 13:00 and 15:00 – 19:00.