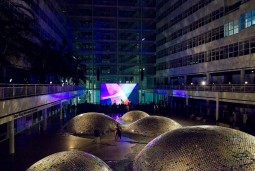 Electronic music and related arts will be center stage at this year’s Rokolectiv Festival scheduled to take place between April 17 and 21 at the Modern Club, as well as at the Museum of Contemporary Arts in Bucharest (MNAC).

The festival will begin with the installation Waste Landscape, which will open at MNAC on April 17. Over 60,000 unsold or collected CDs which have been sorted and hand-sewn are gathered in an installation made by Elise MOrin and Clemence Eliard. The opening will take place on April 18 at Modern CLub, and on Friday, April 19, the fun will move to the museum’s rooftop, where shadows, ghosts, and unveiled truths will be center stage. Tri-angle records stars, Holy Other and Evian Christ will perform during the evening, while Bucharest’s established bass-queen Hipdiebattery, and Polish the Phantom will both open and close the evening.

On Saturday, April 20 will also perform artists such as Village, Sinjin Hawke, MikeQ and John Talabot, while the festival will end on Sunday, April 21, with a daytime performance at Modern Club, no names announced yet.

More details about the festival here.

Tickets can be purchased at MNAC in the night of the event, but are limited to the capacity of the venue. The price of a ticket is RON 25 for Friday’s event and RON 35 for Saturday.