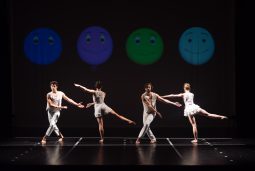 The performance asks what do choreography and Emoji language have in common and brings together the language of dancers-actors and that of the emoji metaphors. According to a presentation of the event, both languages are codes that translate words (states, actions, emotions), turning them into suggestive and expressive images.

The performers in #Emojiplay are Ana Vișan, Irina Strungăreanu, Adrian Nour, Alex Călin, Bianca Bor and Vlad Troncea. The show is a production of the Excelsior Theater in partnership with the  Gigi Căciuleanu Romania Dance Company.

Tickets, priced RON 30, can be purchased at bilet.ro. Representations start at 19:00.