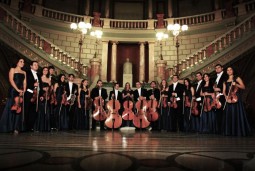 After the concerts Royal Baroque and Royal Classic, Royal Sound concert series continues with a third event dedicated to romance and entitled “Royal Romance”. The concert will be held on March 24 at Romanian Athenaeum in Bucharest.

Along Royal Camerata conducted by Jin Wang,two famous soloists on the Romanian and foreign scenes will also be part of the show. One of them is the violinist Alexandru Tomescu, known for his virtuosity and unique projects. The pianist Eduard Kunz, the winner of George Enescu International Competition in 2007, will also be on the stage for this show.

The concert will feature two serenades signed by Antonin Dvorak, and Tchaikovsky.

The concert will begin at 19:00. Tickets can be bought from bilete.ro at prices between Ron 50 and Ron 120, depending on the category.