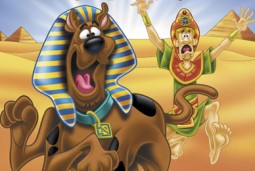 Scooby Doo, Fred, Velma, Shaggy and Daphne solve Egypt’s mysteries in two shows held at Sala Palatului in Bucharest on March 20 and 21, 2015 – Scooby Doo! Mystery of the Pyramid. The second show, on March 21, was scheduled by popular demand.

According to organizers, the show had an audience of over 12,000 people in February 2014. The best known and most beloved hero dog in the world of cartoons, Scooby Doo, will embark on a new journey to distant and torrid Egypt to take part in a new adventure. Scooby will be accompanied by his friends Shaggy, Fred, Velma and Daphne, trying to decipher the mystery of the pyramid of Pharaoh Hatshepsut. The gang specialized in solving mysteries will face malevolent mummies and other traps carefully hid for thousands of years in the Egyptian pyramid.

Tickets for the Warner Bros. production range from RON 65 to RON 250 and are available online on www.eventim.ro and in the Eventim network (Vodafone, Germanos, Orange and Domo stores, Humanitas and Cărtureşti bookshops).