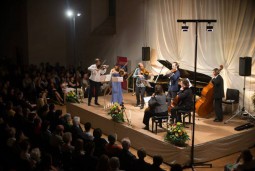 The ninth edition of the SoNoRo International Chamber Music Festival will bring to Bucharest, Cluj and Iasi over 35 artists during October 31 and November 17.

The 2014 program includes concerts inspired by famous bridges of the world: Pont Neuf in Paris, Nevsky Bridge in Sankt Petersburg, Radetzkzy Bridge in Vienna, Brooklyn Bridge or Westminster Bridge in London. Themed concerts will be completed by a poetic evening with the jazz pianist François Couturier’s Tarkovsky Quartet along with Andrei Tarkovski Junior, son of the well-known Russian director, by a Gipsy Night with the famous Hungarian violin player Roby Lakatos and his band from Brussels at the Bragadiru Palace and by an encounter with Bruno Monsaingeon, the most important director of documentaries on XX century music.

Founded in 2006, the SoNoRo Festival brought chamber music at the forefront of Romanian cultural life. In addition to constant partnerships with festivals in Italy, Latvia, Germany, UK, Israel and Japan, SoNoRo held concerts in some of the most famous music halls in the world, such as Wigmore Hall in London, Konzerthaus in Vienna, YMCA din Jerusalem and Carnegie Hall in New York.

Tickets and passes have a 50% discount for pupils, students and pensioners.

Check out more details about the festival program on the official website.