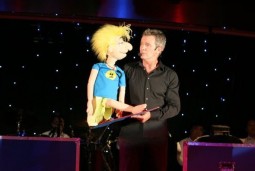 Famous comedian Jimmy Tamley is the special guest at the third edition of Stand Up Comedy Gala Awards, that will take place on April 26 at Patria Cinema in Bucharest.

Jimmy Tamley is considered one of the best puppet artists in Europe. Commentators say the delightful humor and unique vocal technique make each of his shows captivating and hilarious.

The third edition of Stand Up Comedy Awards Gala will be completed by the performances of some of the most popular comedians in Romania, who will bring new material to the public. Name already confirmed are: Badea, Costel, Teo, Micutzu, Sorin Radu.

The show will begin at 19:00 and tickets can be purchased from bilete.ro for RON 80.