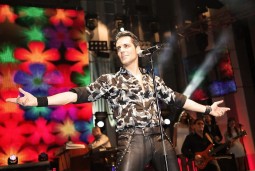 Stefan Banica Jr. is a Romanian singer and actor, acclaimed by the Romanian public for his early career in a couple of successful romantic films and tours around the country. He released several rock’n’roll music albums, and has delivered 44 Christmas concerts at Sala Palatului since 2002, for an audience of over 220,000 people, setting record audiences for Romania.

The Christmas concerts held by Stefan Banica has been a tradition during the holiday season for more than a decade. The tickets are priced between RON 60 and RON 200 and can be purchased from bilete.ro network.