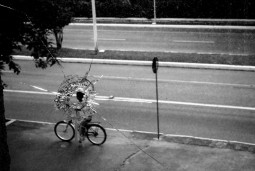 The street photography exhibition World in Streets is open between July 20th and July 26th in Revolutiei square in Bucharest.

The exhibition brings together works by the most active members of the On Spot group, the result of almost two years of photographic exploration of streets in Romania and worldwide. Besides works by Romanian photographers, the exhibition displays photography by authors from France, Italy, Spain, Israel, UK, Scotland, Portugal, Brazil or Slovakia.

Visitors are invited to discover the spirit of streets, emotions, states, or moments captured on the street, gathered in a series of black-and-white and color photography.

The On Spot group was created by Mirela Momanu and Fred Fogherty, following a street portrait workshop held as part of the Photo Week 2014.