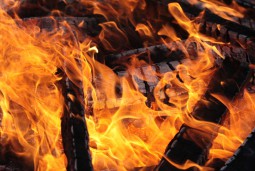 Focul lui Sumedru (Sumedru’s Fire) is an old tradition of the villagers in the region of Bran, Transylvania. In the recent years it has become a festival taking place in Moieciu, near Bran, just before the arrival of the cold season, on October 25 – 26.

This old tradition marks the renewal of calendar time, on the same day the orthodox calendar celebrates Saint Dumitru. Fires are set up high on the hills so they can be seen from a long distance. Villagers call for everyone to take part in the ritual, shouting “hai la Focul lui Sumedru!” (come to Sumedru’s fire!), calling out especially children. A fascinating celebration with pre-Christian origins, explained by historical presentations held during the event.