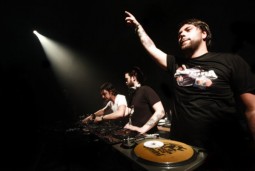 Swedish House Mafia will perform on December 14 in Bucharest . The three popular DJs Axwell, Steve Angello and Sebastian Ingrosso are currently on their last tour together as a crew, named One Last Tour.

Swedish House Mafia is a Swedish electronic dance music trio that formed in late 2008. The group ranked at number ten on the DJ Magazine Top 100 Poll 2011, having been called “the faces of mainstream progressive house music”. The genre they approach is house, electro house and progressive house and they collaborated with labels like Polydor, Ministry of Sound and UMG. They achieved international success due to their first official single “One (Your Name)” that charted at number 7 in the Uk Singles Chart on Beatport.

The concert will be held on December 14, at Romexpo – Central Pavilion, in Bucharest and will start at 22:00. The tickets are priced between RON 110 and RON 240 and can be purchased from bilete.ro network. Children under 14 years old are not allowed.