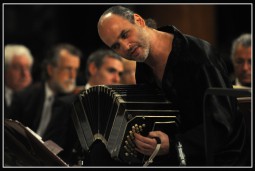 A new edition of Da Capo Chamber Music series will have Marcelo Nisinman & Friends as guests in a concert set for February 10th.

A disciple of Argentinian composer Astor Piazzolla, Marcelo Nisinman is a Buenos Aires musician playing the bandeon, a instrument invented in Germany and reinvented in South America to give a voice to the Argentinian tango. He is at the same time a composer, performer and arranger and his concerts usually are set around pieces by Piazzolla, in addition to the original compositions. He performed alongside Martha Argerich, Gidon Kremer, Britten Sinfonia, Gary Burton, Fernando Suarez Paz, Ute Lemper, Assad Brothers and the Philadelphia Orchestra, WDR Big Band, the Arpeggione Chamber Orchestra, the National Des Pays de la Loire Orchestra or the Belgrade Philharmonic Orchestra and many more.

Playing the violin will be Philippe Graffin, known for his interpretations from the French romantic repertoire. He is one of the few students of Josef Gingold, in his turn one of the disciples of Eugéne Ysaÿe. He served as artistic director of several festivals and is a founder and artistic director of the chamber music festival Consonances in France. He plays a 1730 Venetian violin.

Playing the piano is Diana Ketler. Coming from a Riga family of musicians, she performed as soloist and chamber musician in almost all countries in Europe, Japan, Canada, US and Russia. She is an artistic director of the Chiemgauer Musikfrühling in Germany and of the SoNoRo International Music Festival in Romania. She also teaches piano at the Royal Academy of Music in London since 2001.

Winni Holzenkamp will be playing the contrabass. He studied both the classical and the jazz instrument and he later entered the world of the tango with a scholarship at the Escuela de música popular de Avellaneda. For the past eight years he has been teaching and performing as part of the Tango Silencio festival in Tarbes and he is participating in classical and contemporary music festivals in Berlin, Paris, London, Moscow, Beirut, Lisbon or Reykjavik.

Alberto Mesirca will be joining at the guitar. He is a winner of many awards and has been named ‘rising star’ at the Gitarrenfestival in Vienna. Composers Leo Brouwer, Dusan Bogdanovic, Angelo Gilardino, Mario Pagotto have dedicated several of his compositions to him.

Tickets, priced RON 30 and RON 50, are available at eventim.ro.