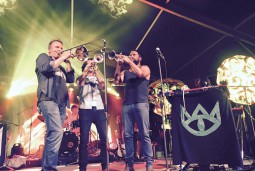 Australian band The Cat Empire will perform in Bucharest on October 23rd at Arenele Romane. They will introduce their new album, Rising with the Sun, at the Bucharest performance. The concert is part of the tour of the same name.

The colorful music of the Australian group is famous around the world but difficult to describe and hard to categorize. The group’s reputation was built around a live, powerful show, which over half of million fans saw in 2015.

Lead singer Felix Reibl describes the new album as “an explosive world, full of fireworks and exotic flavors, alongside a deep rhythm.”

Tickets, priced RON 90, can be purchased at eventim.ro.