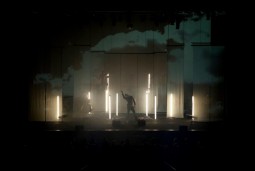 Some of the most innovative British musicians of the moment, mini art-pop band “The Irrepressibles” will perform for the first time in Bucharest, in an original show called “Nude”, which will take place on March 23 at Control Club – Berlin Hall.

The Irrepressibles is a artistic group initiated by the musician Jamie McDermott. The band is a mini chamber electro-Baroque orchestra, whose performances adapt easily from a stage to another, keeping its elements of choreography and scenography, as well as audio-visual concepts.

Guitar, piano, violin, cello, bass and percussion are the roles they take one at a time, while music acts succeed as a theater act.

The concert will begim at 22:00. Tickets for the event can be purchased from easyticket.ro network and cost RON 50.