The Night of the Ad Eaters – a cinema experience to enjoy 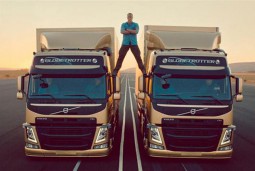 “The event is not a marketing lesson, it is a cinema moment that you should enjoy!” says Jean-Marie Boursicot, the creator of the Night of the Ad Eaters. In the past 33 years, the event has been celebrating advertising spots that rise to the artistry of the cinema in over 40 countries worldwide. During seven hours of program, 300.000 enthusiasts from all over the world watch awarded and top advertisements.

In 1981, film fan Jean-Marie Boursicot imagined and created the concept that won fans from over 60 nationalities worldwide, from Vladivostok and New York, to Prague, Singapore, Mauritius Islands, Hong Kong or Sydney. Boursicot reached the Guinness Book of Records for its collection of 700,000 films which grows constantly with about clips 10,000-20,000 per year.

Romania is on the list for a long time now and this year the Night of the Ad Eaters (Noaptea Devoratorilor de Publicitate) will take place on November 7 in Bucharest, at Sala Polivalenta. The show will be opened by DJ Cosmin Cojocaru, Radio ZU producer, What’s Up and Jagermeister Brass Band.

Tickets are available on www.bilete.ro, in the Romanian Post offices, in the Inmedio shops market with the Bilete.ro logo and the Germanos stores. Check out the event page for more details.