Three Brits at the International Stand Up Comedy Festival in Cluj 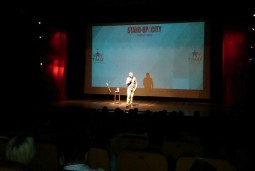 The International Stand Up Comedy Festival takes place next month in Cluj. This second edition includes 25 artists performing in three venues (Casa de Cultura a Studentilor, Cinema Victoria and Shto College Bar), 13 shows and 30 hours of good jokes. The shows will be held mostly in Romanian, but also in Hungarian and English.

Among international guests are Angie McEvoy, Paul Pirie and Simon Feilder from Great Britain. Angie McEvoy started her stand-up comedian career at the Edinburgh Festival in 2000, when she reached the second place in the BBC New Comedy Awards competition. She also wrote materials for BBC Radio 2’s The Jeremy Vine Show. Paul became known quickly in Scotland’s comedy world with a series of sold-out shows at the Glasgow Comedy Festival. Since then, his career went on with TV and radio appearances and parts in movies. Through his unique style, full of energy, Paul has become one of the most important Scottish comedians in Great Britain. Stand-up comedian, voiceover artist and presenter, Simon Feilder went this year on the stages of Edinburgh Fringe Festival and Hollywood Festival. Recently, he did voiceover for the BAFTA-awarded Yo Gabba Gabba show and the BAFTA-nominated Jim Jam & Sunny show.

You can see the three of them at the Closing Gala of the festival on November 10, at 20:00, at Casa de Cultura a Studentilor. Tickets are 40 lei and are available online at www.biletmaster.ro or at Casa de Cultură a Studenţilor Cluj-Napoca, Daisler Print House, Jaxx, Shto College Bar or Kolozsvári Magyar Diákszövetség Kmdsz headquarter.

More details on the event page and on the official festival website.